Getting Groceries: Food Access Across Groups, Neighborhoods, and Time

Two miles east of downtown, Michigan Street is largely vacant. But in the early 20th century was a bustling corridor for the Willard ... 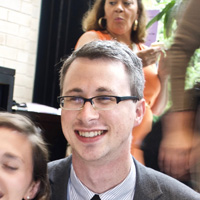 Matt Nowlin is a research analyst with the Polis Center. He works in the Community Informatics team, focusing on analysis, data visualization, and web development. Matt received his Master of Urban and Regional Planning degree from Ball State University and his Bachelor of Music in Jazz Studies from Indiana University Jacobs School of Music.