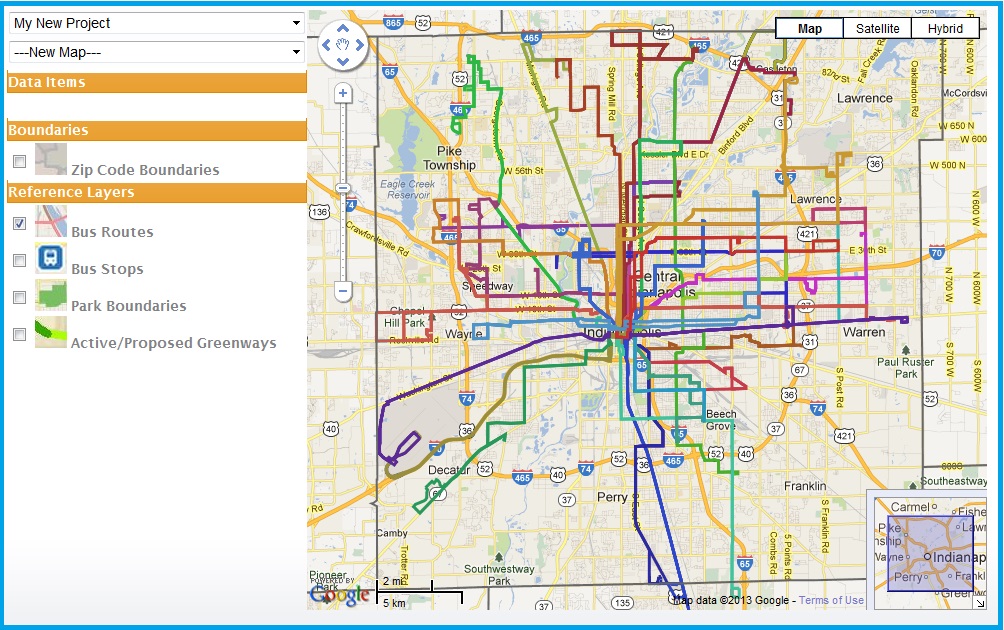 Last week, the Tax and Fiscal Policy Committee voted to delay House Bill 1011, which would allow voters in Hamilton and Marion counties to determine whether or not they want to increase taxes to build a regional transit system. This has been a hotly debated topic in the news from all sides, so I’m sure you have an opinion, too. I certainly do!

But my point is not to be yet another voice sharing his personal views. My point is to encourage you to make your decision on the topic based on data, as opposed to what’s being said in the media.

1. Consider existing availability and accessibility of public transit: Currently Hamilton County has a limited public transit system. For example, there is a bus service, but it requires 24-hour notice. I was unable to find data about the extent of the routes. Marion County, on the other hand, uses IndyGo and has bus routes throughout the county. The following SAVI data highlights the location and extent of Marion County’s bus routes.

In SAVI, you can view individual bus stops, too.

Marion County also has greenways to allow people to safely walk or bike as a commuting option. The City of Indianapolis provides the following greenways map, which is available on SAVI.

2. Consider commuting patterns:  In order to make a decision about the value of investing in mass transit, it’s important to understand how people are currently getting to and from work. For both counties, more than 80% of working residents are driving alone to get to work. The following chart shows how the other 20% are commuting.

Note: Population percentages are based on percent of workers 16 and older.

3. Consider median household income of commuters: The mass transit bill, if approved and implemented, will require residents of Marion and Hamilton counties to pay additional or higher taxes to support it. The median earnings in Marion County is $30,554 as compared to $42,061 in Hamilton County. The following chart again shows commuting patterns but also includes median income.

Now that you’re armed with data and facts to make your decision, we’d love to hear from you. What’s your opinion on the bill?