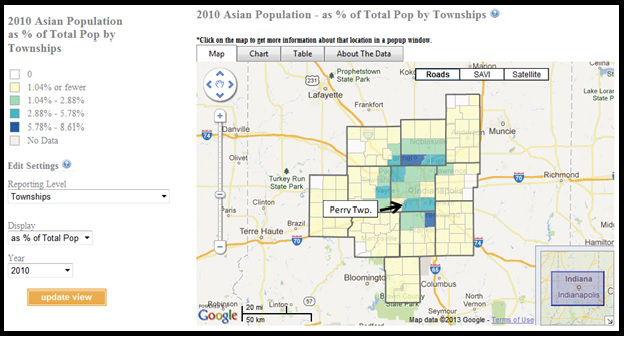 In celebration of Asian-Pacific American Heritage Month, I thought I’d explore some of the changing population trends in Indianapolis with regards to this demographic.

The U.S. Census Bureau records Asian and Pacific Islander demographics separately. In Marion County, the Pacific Islander population is negligible at only 0.05% of the total population. But you may be surprised to learn that in the last few years, we’ve seen a growing number in the Asian population in this county.

Let’s start by looking at the overall distribution of demographics in Marion County.

When a race or culture of the population grows, it tends to do so within spatial clusters. Think of how New York City developed in the late 19th and early 20th centuries with waves of immigrants. Neighborhoods began to become labeled as “Little Italy,” “Chinatown,” etc.

I wanted to see if this trend held true in Indianapolis, too, and it does! By far, Perry Township has the highest (and fastest growing) Asian population in Marion County. Although note that  Clay Township, Hamilton County, and Clark Township, Johnson County both have Asian population is over 8%.

A township is still a fairly large geography, though, and I wanted to drill down as far as I could. As the following map shows, of Perry Township’s 20 census tracts, one tract has the highest Asian population at 26%.

Finding detailed demographics data like this can be very beneficial to existing community organizations and can encourage the development of new organizations or services to meet changing needs. In 1986, for example, the Asian Help Services (AHS) was established by the United Methodist Church Metropolitan Ministries as a nonprofit serving Asian immigrants, refugees, businesses, students, and visitors. It strives to make their transition to Central Indiana smoother by helping them to bridge many language and cultural barriers. There are a number of other organizations with similar missions, some of which are highlighted in the map below.