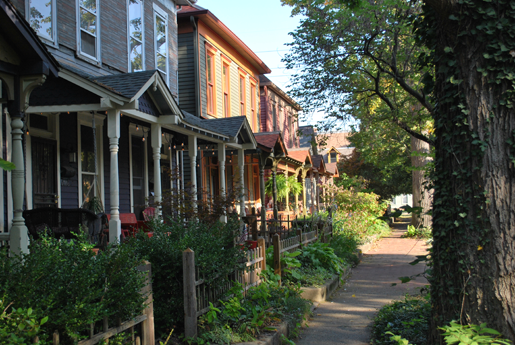 A change over time in owner occupied houses is one way to examine whether a community is growing, remaining stable, or growing in terms of owners living in their own homes.

The following comparison is based on federal census data that was collected in 2000 and then in 2010.

What is being compared is the area of the KI EcoCenter and its surrounding neighborhood.  This entire area is bordered on the north by 32nd Street, on the south by Fall Creek Parkway, on the east by Central Avenue, and one the west, mainly by Shriver Avenue, which runs close to and parallel with the east side of I65.  (See map #1.)

Block groups are statistical divisions of census tracts, are general defined to contain between 600-3,000 people, and are used to present data and control block numbering.  A block group consists of clusters of blocks within the same census track.  Most block groups were delineated by local participants in the Census Bureau’s Participant Statistical Areas Program (U.S. Census Bureau).

One block group is on the southwest corner of this KI EcoCenter area, is labeled as 3515.00.2 (“D” in Table 1 below) in the census data, and has Fall Creek Parkway on the south, 30th Street on the north, Capital Avenue on the east, and Shriver Avenue on the west.  (Also, see map.)

In between these two is the block group in which the KI EcoCenter is located.  It is labeled as 3515.00.3 (“E” below) and has Fall Creek Parkway on the south, 30th Street on the north, Meridian Street on the east side, and Capital on the west.

Two other block groups are north of these three.  Block group 3510.00.3 (“A) is above and on the north east corner of the whole KI EcoCenter areas covered in this analysis.  It has 30th on the south side, 32nd Street on the north, Central Avenue on the east, and Meridian Street on the west.

The final block group was labeled 3510.00.4 (“B”) in the 2000 census and 3510.00.1 in the 2010 census (Changing numbers between censuses is common, but it means any analysis must be carefully done to ensure the same areas are being compared.)  It is bordered on the south by 30th Street, on the north by 32nd Street, on the east by Central Avenue, and a jagged west side composed of both Indianapolis Avenue and Ethyl Avenue.

Table 1 below shows this data.  The first column lists the block group numbers geographically described above.  Column two is the number of owner occupied houses in 2000.  Column three is the same for 2010.  Column four is the raw number difference, plus or minus, with plus meaning an increase in such houses and a minus meaning a decrease.  The fifth column is the percent change between 2000 and 2010.

The next largest percentage decrease was for block group E with a 16.7% decrease, but this was only four houses as this area contains few owner occupied homes.  E is the block group in which the KI EcoCenter is located and has Fall Creek Parkway on the south, 30thStreet on the north, Meridian Street on the east side, and Capital on the west.

The second largest raw number decrease and the third largest percentage decrease were for block group D with 25 fewer owner occupied houses for a decrease of 14.8%.  As stated above, D has Fall Creek Parkway on the south, 30th Street on the north, Capital Avenue on the east, and Shriver Avenue on the west.

Block group A had a decrease of 18 homes for a 14.0% decrease.  Area A has 30th on the south side, 32nd Street on the north, Central Avenue on the east, and Meridian Street on the west.

Block group C actually had an increase of 10 homes for a 12.3% increase.  It has Fall Creek Parkway on the south, 30th Street on the north, Central Avenue on the east, and Capital Avenue on the west.

This data raises some serious concerns about the decline of owner occupied homes in the designated KI EcoCenter area.  This is particularly important in areas A, B, and D.  This could mean that what was once a community, principally occupied by African Americans, is being converted into something else, especially given the expansions of Ivy Tech Community College and the Children’s Museum and publicly stated efforts to gentrify the Near North (NNDC President in Near North News, Sept. 12, 2013).  However, just based on this data, it is not possible to determine a cause for the decline, though it ought to certainly cause concern about the potential destruction of another African American community in Indianapolis, much as happened with IUPUI’s expansion.

Next steps in the analyses will look at the changes in this specific area in rental property and vacant houses.

The following map shows the changes in blockgroups from 2000 to 2010. 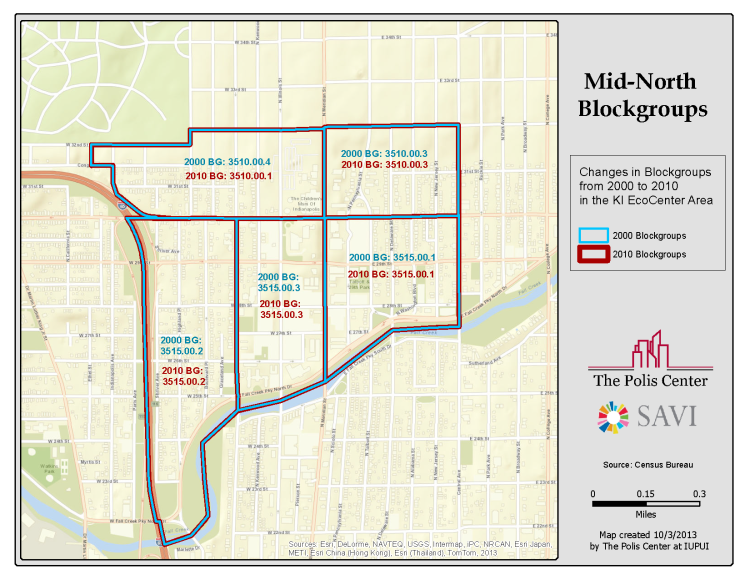 The following map illustrates the number of housing units lost from 2000 to 2010 in the KI EcoCenter area. 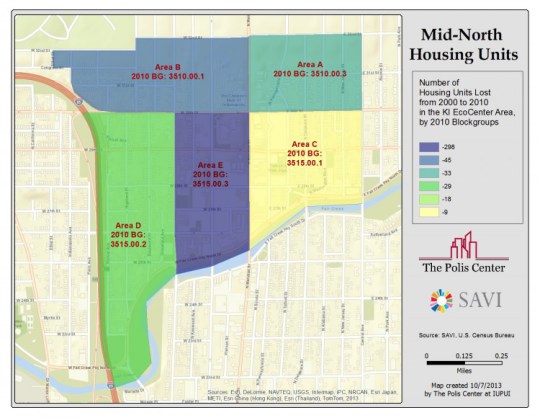