What’s Trending in the Near Westside Neighborhood

The City of Indianapolis, IUPUI, and Lilly Endowment recently announced a $30 million investment to improve IUPUI and the Near Westside neighborhood (See IndyStar story by Erika Smith).  Some of the major improvements will include streetscapes, new bike lanes, and sidewalks – and turning New York Street and Michigan Road into two-way streets.  But how will this impact the neighborhood and its residents?  For one thing, it aligns with some of the goals the community established in its quality of life plan.

For the past few years, this neighborhood has been involved in a resident-driven process to define the neighborhood’s needs and assets, envision the future of the neighborhood, and develop a Quality of Life Plan that guides community development efforts toward its vision to be a great place to live and work.

In many ways, it is too early to measure the impact that those community development efforts have had on the community thus far – we will begin to see more positive trends in the data in the years to come.  In the meantime, here are a few of the successes that we can see.

Positive Trends in Near Westside in the past 5 years: 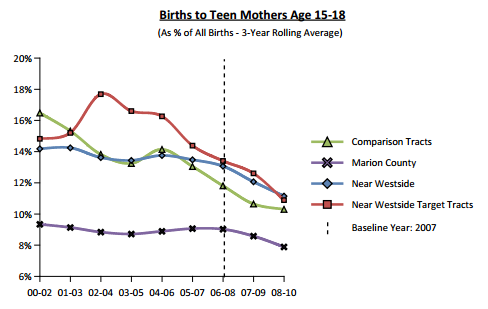 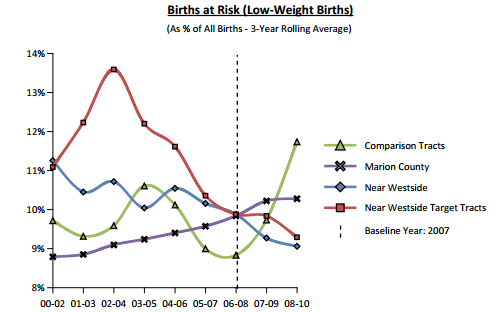 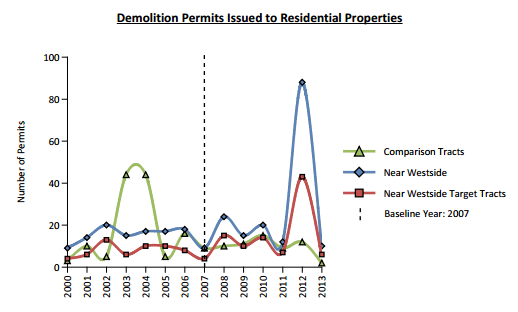 View a more detailed description of changes in the Near Westside in the past decade in our full report.

Want more data about Near Westside and other neighborhoods?

Quality of life monitoring reports created by SAVI describe the trends over the past 5 to 10 years are available for 5 neighborhoods:

View similar profiles for other neighborhoods

Want to know about another positive change happening in this community?  My next blog will look at Near Westside crime trends and share efforts to keep Near Westside youth out of the child welfare and justice systems.

Sharon Kandris is the Director of SAVI and Community Informatics at The Polis Center.