The Rich Live Longer Everywhere. For the Poor, Geography Matters. 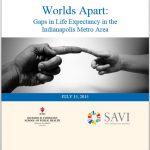 The Times story references work published in the April issue of The Journal of the American Medical Association, which compared research on the life expectancy of 40-year-olds with household incomes below $28,000, adjusted for race.  According to the article, “One conclusion from this work…is that the gap in life spans between rich and poor widened from 2001 to 2014. The top 1 percent in income among American men live 15 years longer than the poorest 1 percent; for women, the gap is 10 years. These rich Americans have gained three years of longevity just in this century. They live longer almost without regard to where they live. Poor Americans had very little gain as a whole, with big differences among different places.”

This unfortunate news correlates with the research and report prepared by the Polis Center and SAVI: “Nearly one-fourth of the ZIP codes in the Indianapolis Metropolitan Statistical Area (MSA)–25 of 104 analyzed–home to roughly 385,000 people, have life expectancies below the 1990 U.S. average (75.4 years) – demonstrating more than a 20 year lag behind the country overall. In the metro Indy community with the lowest life expectancy, a baby born today can expect to live only as long as a baby born in the U.S. more than 60 years ago. Our results demonstrate that the benefits of progress have not been actualized in many communities of metro Indy. There is a gap of six years of life expectancy between the highest and lowest ranking counties in the MSA. While Hamilton and Madison Counties share a border, they stand out in contrast to one another; Hamilton has the highest county life expectancy, while Madison has the lowest.”

Click the links above for both articles and think about the findings on national and local levels that social and economic policies are the underlying drivers of the discrepancy and the fact that health and the length of one’s life cannot be separated from the societal context in which people live.