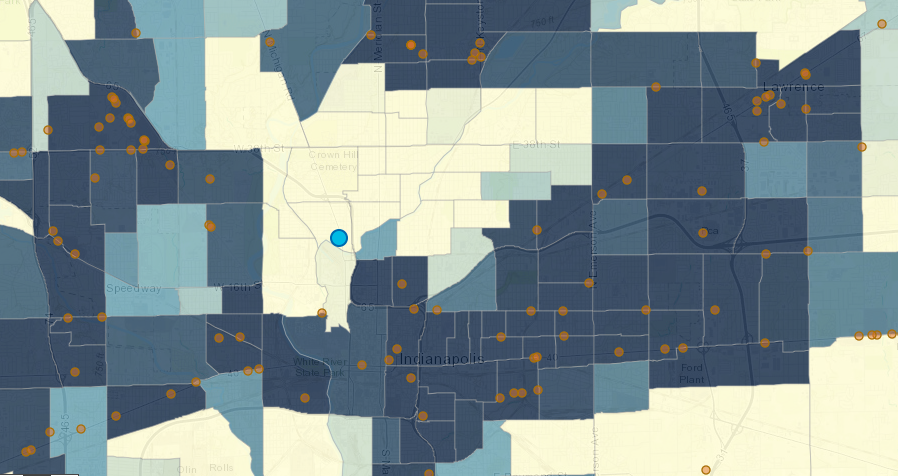 WFYI reports that the City of Indianapolis announced the first recipient of its Healthy Food Access grant on Thursday. Flanner House will receive $400,000 to develop Cleo’s Bodega, a micro-grocery that will sell discounted food through a relationship with Under the Sun.

Given this news, we want to take a look at current food access and how  the location of Cleo’s Bodega will improve that.

The micro-grocery will be located in Flanner House’s current location at 2424 Dr. Martin Luther King Jr. Street, in the middle of Indianapolis’ biggest food deserts. According to our analysis, the census tract where Cleo’s Bodega will be located has no access to a grocery within one mile. Using food source locations from SAVI’s asset database, we filtered out store types like gas stations, restaurants, convenience stores, and drug stores. The resulting map shows a one mile “buffer”, or access area, around each store.

One Mile Access Area Around Groceries, Supermarkets, and Independent Groceries

By layering those grocery access areas over 2015 census data (from the 2011-2015 American Community Survey 5-Year Averages), we can make estimates about the people who do and do not have food access in each tract. This results in a map showing us the percent of each tract (by area) and the estimated population with access to a grocery. The northwest side, mid-north area, and northeast side have some of the lowest access in the county, along with some of the highest numbers of low- and moderate-income households and households without vehicles.

You can also learn more about food access at IndyVitals.org, where use use USDA data to calculate the percent of the population who reside less than a mile from a supermarket or large grocery store.