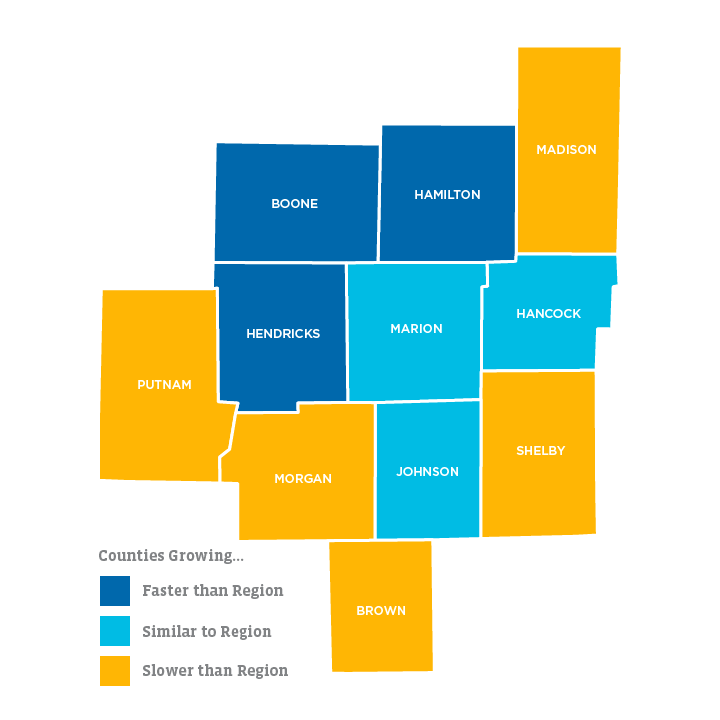 The Indianapolis region’s population grew by over 18,000 people from 2015 to 2016, according to the newest American Community Survey (ACS) results, published to SAVI in April. The region is now home to 1.97 million people, based on the 2016 ACS 5-Year Average.

The overall trends show Indianapolis losing White population but experiencing steady net growth driven by people of color, while suburban counties are growing faster than the regional average. Rural counties have relatively static population from 2015 to 2016.

Overall, the region grew 0.9 percent from 2015 to 2016. Boone, Hamilton, and Hendricks counties grew faster than average (around 2 percent), while Brown, Madison, Morgan, Putnam, and Shelby counties all had relatively static or slightly declining populations.

Growth rates were similar for all Marion County townships, between 0.5 and 0.7 percent. Center Township added the most population (a net gain of 994 residents), followed by Wayne Township (945 residents). The lowest growth was in Decatur Township, which added only 174 residents.