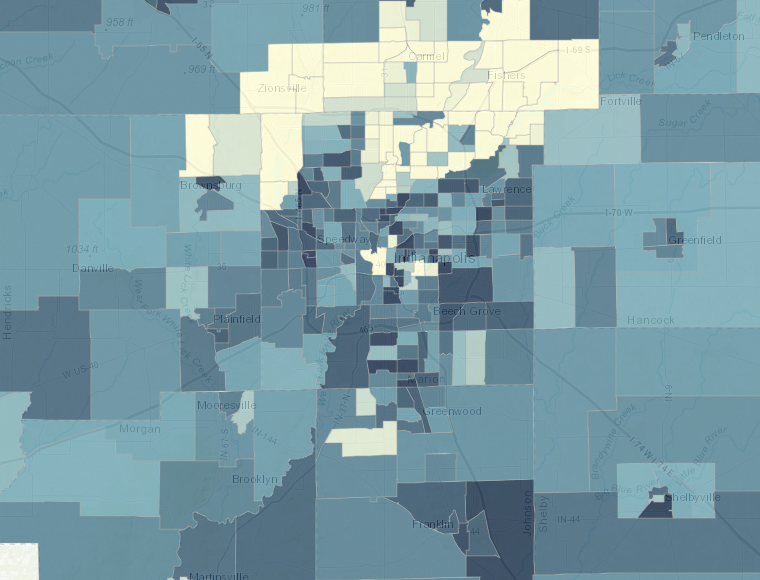 Recently, a friend mentioned to me, “It seems like everyone these days has a master’s degree.” This was interesting to me because I know from studying Indianapolis’ demographics that a large portion of the Indianapolis region’s population does not have any college education, let alone a graduate degree. But I also took her point—it seems anecdotally that a large proportion of people we are close to have graduate degrees.

Clearly, my friend and I are not interacting with a representative set of people of differing education levels. This is important because education has such an extreme impact on a person’s economic situation. Workers who have no education beyond high school are much more likely than the average worker to drop out of the labor force or be unemployed. Social networks also have a big impact on economic opportunity, and if people with different education levels are isolated from each other, it may further compound the economic disadvantages of low educational attainment.

I began to wonder, is this social segregation driven by where we live? Are people of different education levels geographically segregated?

To discover the answer, we measured the isolation of those with low educational attainment and the educational diversity of census tracts. We find that, in most of the region, people live in neighborhoods with a mix of education levels. However, some pockets have extreme concentrations of high or low education level populations.

Without Diploma, One-In-Eight Are Unemployed

For this group, labor force participation is lower than average and unemployment is higher than average. Of working age people without a high school diploma, only 60 percent participate in the labor force, compared to 88 percent for those with at least a bachelor’s degree.

In other words, people with a high school diploma or less make up 37 percent of the Indy metro’s working age population, but make up over half of all those who are out of work or not looking for work.

People Without Any College Make Up Half of Unemployed

People with a high school diploma or less make up 37 percent of the Indy metro’s working age population, but make up over half of all those who are out of work or not looking for work.

This map shows the diversity of educational attainment levels across the region, by census tract. Click

Overall, Region Is Not Segregated by Ed. Level

Most census tracts across the region are also well balanced in terms of education levels. The region scored 0.09 on a measure of evenness (Thiel Index), where 0.0 is completely even and 1.0 is completely segregated, meaning our neighborhoods’ educational diversity closely matches that of the city overall. As the map above shows, most of the region scores highly in a diversity index, meaning people of different education levels are evenly distributed across the region.

In a measure of isolation (Interaction Index), residents in the Indianapolis region with at least some college have a 34 percent chance of interacting with someone who has only a high school diploma or has not graduated high school. In other words, for people with at least some college education, one in three people they meet will have no college education.

Despite the relative evenness of the region in terms of education level, there are some neighborhoods and cities whose education levels do not match the region overall. Four areas stand out as significantly less educationally diverse than the region: northern Marion County and the norther suburbs, Downtown, neighborhoods near Twin Aire and Christian Park, and the south side of Anderson. Some of these lack diversity because of a concentration of highly educated residents, and some because of a concentration of residents with low educational levels.

Concentrations of the Highly Educated

Downtown Indianapolis and the Old Northside are similar. Downtown, 9 in 10 residents age 25 and older have at least some college, compared to 6 in 10 for the region overall.

Neighborhoods on the south side of Anderson lack educational diversity because they lack residents with bachelor’s degrees. For example, in the area between 53rd Street and 32nd Street, only 7 percent of the population 25 and older have bachelor’s degrees. Over half of this population has a high school diploma only.

Areas near Twin Aire and Christian Park, on Indianapolis’ near southeast side, lack educational diversity for similar reasons. In the tract where Christian Park is located, 1 in 4 residents 25 and older have no high school diploma, and only 1 in 5 have had any college. A few blocks west, over half of the residents 25 and older lack a high school diploma.