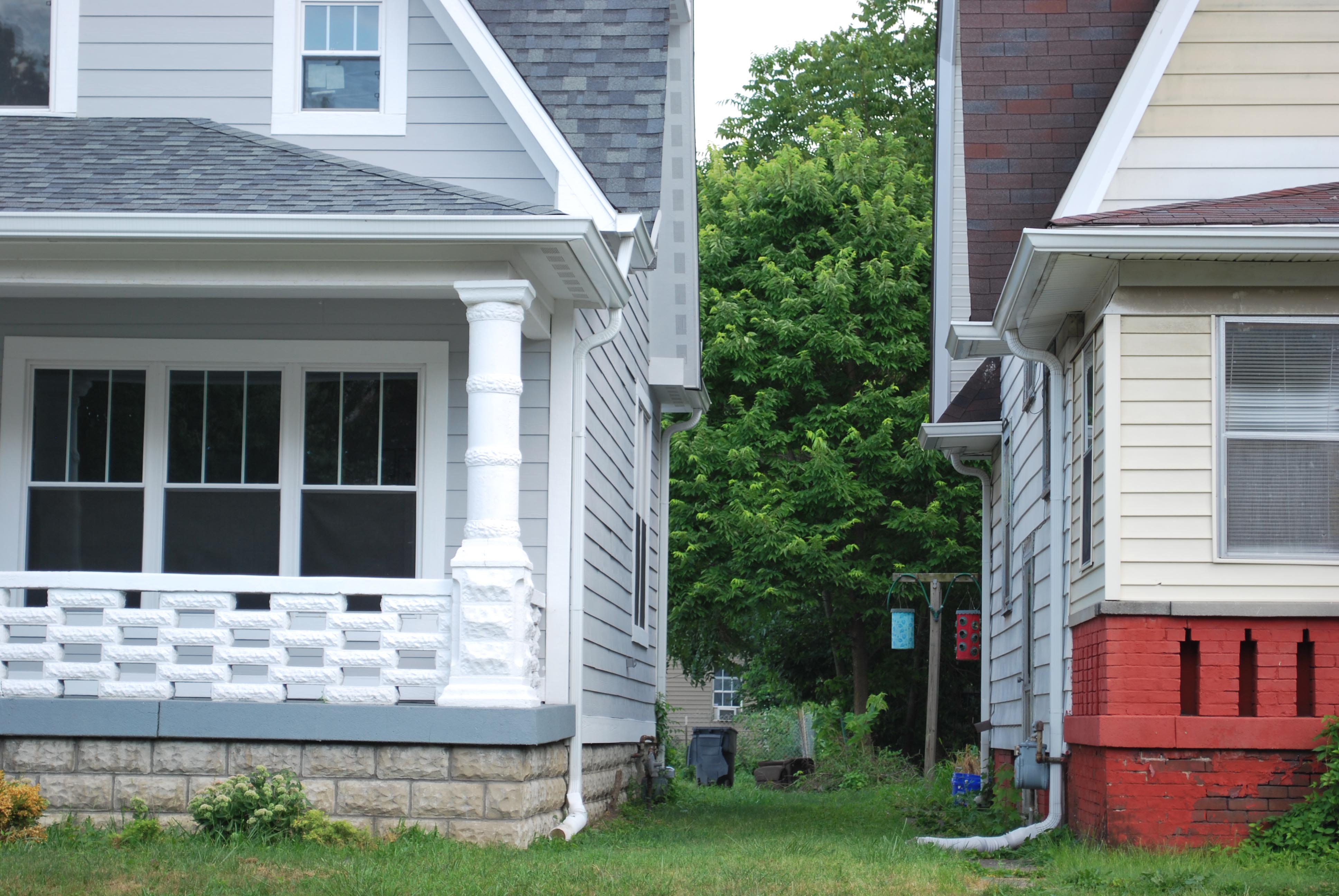 This analysis will use data from Tract 3547 because census data is available for that area, even though it does not precisely match the boundaries of the neighborhood. Tract 3547 extends to Washington Street, but St. Clair Place stops at Michigan Street. The tract ends at Keystone Avenue to the east, while the actual boundary of the St. Clair Place neighborhood is Rural Street, a few blocks further east.

St. Clair Place exemplified the decline of early twentieth century urban neighborhoods, and now it represents common practices in nonprofit-led neighborhood redevelopment. Population boomed to 3,900 in 1940, but fell to 1,400 by 2010, while vacancy rates increased to 45 percent. Since 2010, multiple federal and local funding sources have been combined, anchored around the 2012 Super Bowl Legacy project, to address blight and redevelop properties.

In the last decade, the neighborhood has experience increased mortgage activity, housing prices, and homeownership rates. And while most of these homebuyers and homeowners are white, the neighborhood is growing more diverse. Six in ten residents are people of color. Poverty rates are improving here as well, most significantly for people of color. At the same time, the college-educated rate among adults has increased from three percent in 2010 to 13 percent in 2016.

But the difficulty in leveraging equity growth among homeowners to improve the lives of renters (94 percent of black households here are renters) shows the need for creative policies to address discrepancies in homeownership and the racial wealth gap. 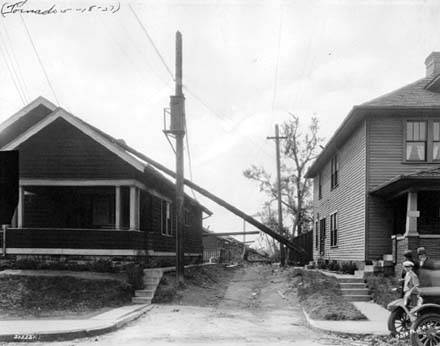 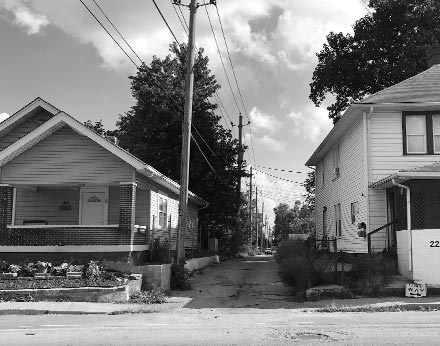 An alley at New York Street and Jefferson Avenue (just south of St. Clair Place) in 1927 and 2018. Typical for homes in the area, the original siding and windows have been replaced with vinyl. The porch on the right hsa been covered in concrete block.

St. Clair Place was developed on the east side of Indianapolis largely between 1890 and 1920. When first developed, the neighborhood was near the outskirts of the city. In 1898, according to a Sanborn fire insurance map from that year, the city limits were at the Belt Railroad near Sherman Drive, about half a mile from the eastern boundary of St. Clair Place. In 1917, a home at 907 Eastern Avenue was listed for sale at $3,800 (about $74,000 in 2018 dollars). It was advertised as “thoroughly modern” with six rooms and a garage. Population grew to 3,897 by 1940 (according to the U.S. Census). 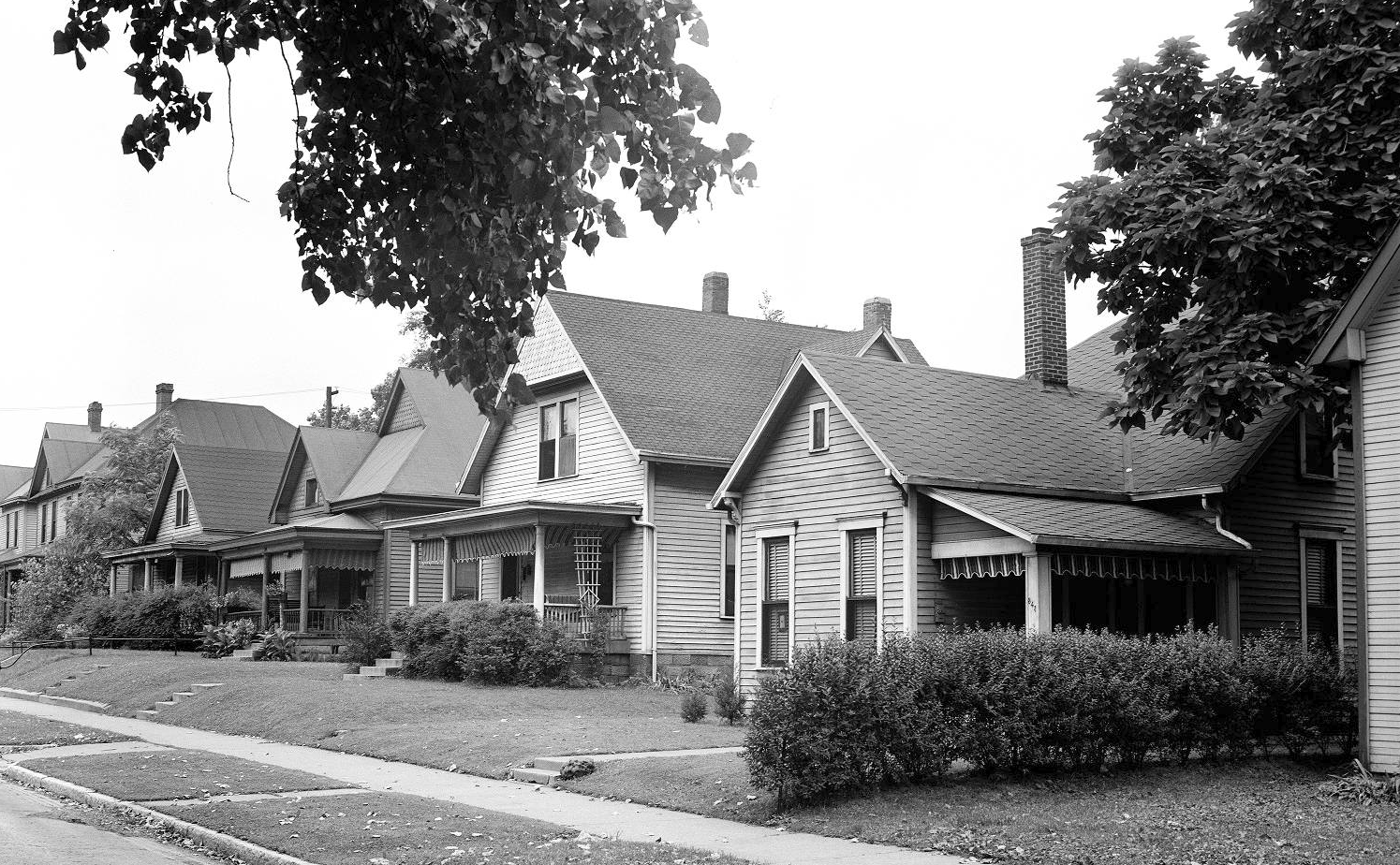 The population fell steeply from 1970 until it reached 1,431 in 2010. In 1972, the inner loop of Interstate 65/70 was constructed east of St. Clair Place, reducing the neighborhood’s connection to downtown Indianapolis.

At the same time, vacant housing units increased. In 1940, 3.1 percent of housing units were vacant, a slightly better rate than Marion County overall. By 1970, a tenth of homes in this tract were vacant, worse than 90 percent of tracts in the metro area. Almost half the neighborhood was vacant in 2000, which was the second-worst vacancy rate among all tracts in the region.

Since 1940, Population Fell and Vacancy Increased 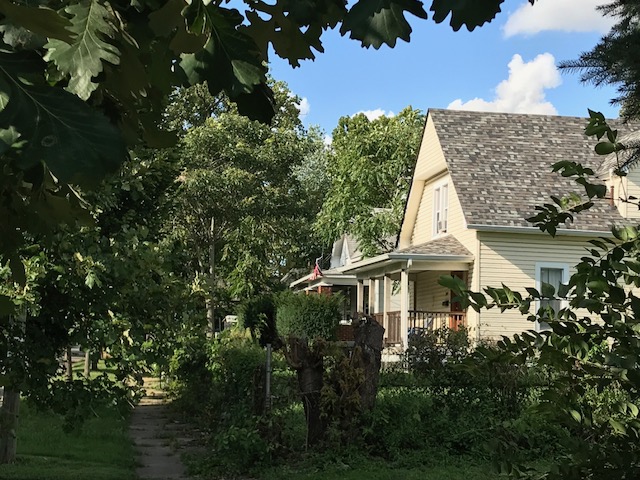 Homes on 300 block of North Jefferson Avenue, 2018. The home in the foreground of the 1943 image has been demolished.

Development of St. Clair Place and the Near Eastside

Scroll through the images to see how the Near Eastside changed from 1898 to 2017. The railroad tracks on the eastern end of the map were the city limits in 1898. By 1941, industry had clustered there, near Sherman Drive and Michigan Street. In 2017, much of that industry is now demolished, including the RCA plant. Note the clearance on the west side of the map as Interstate 65/70 is constructed in 1972.

Combining or “stacking” diverse funding sources is core to neighborhood redevelopment strategies. In St. Clair Place, funds from the Neighborhood Stabilization Program (NSP) were the foundation of redevelopment efforts. These funds were combined with other local, federal, and philanthropic funds, including HUD’s HOME program, funding from the areas Housing TIF district, and funding from partners like MIBOR.

NSP is a program of the U.S. Department of Housing and Urban Development (HUD). Indianapolis was awarded $29 million in NSP funds in 2008. A portion of this funding was directed to St. Clair Place and packaged as part of the 2012 Super Bowl Legacy Project. According to Indianapolis’ NSP application, funding was used for acquiring, demolishing, and redeveloping properties, as well as other purposes, and was combined with other federal funds, local funds, and philanthropic funds.

According to John Franklin Hay, executive director of Near Eastside Area Renewal (NEAR), this funding was used to redevelop only “vacant land and abandoned houses,” not redevelop occupied housing units. As part of the requirements of the NSP funding, redeveloped properties had to be sold to low- and moderate-income households earning 120 percent of the area median income or lower. (In 2010, the median income for a four-person household was $68,700, meaning households earning $82,440 or less were eligible to purchase NSP funded homes.)

The initial owner-occupied homes were redeveloped along Jefferson Avenue. The average buyer of these first homes had an income near 80 percent of area median income ($54,950 for a four-person household), according to Hay.

The neighborhood continues to be the focus of investment efforts. In 2014, Indianapolis was awarded funding through HUD’s Blight Elimination Program. A portion of this was used in St. Clair Place. In 2017, NEAR sold nine redeveloped homes at an average price of $123,000, according to Hay. The average buyer earned 65 percent of area median income. (The metro area’s median income was $69,900 in 2017).

For the sake of brevity, the terms “mortgages” or “loans” here refer to newly originated loans for the purchase of an owner-occupied principal residence. 2007 is the comparison year because it is before the NSP investment began and before the Great Recession. This data is available from the Home Mortgage Disclosure Act, accessible here and in SAVI Community Profiles.

Since 2007, Mortgage Amount and Borrower Income are Higher

Housing and Economic Indicators Improving, but Vary Widely by Race

After this investment, the real estate market in St. Clair Place is significantly changed. In 2007, there were only ten new mortgages in the neighborhood. By 2017, this had almost tripled to 29 new mortgages. Mortgage activity in Marion County only grew three percent in that period.

While this cannot prove the increased housing activity was caused by redevelopment, the data shows much faster growth here than in the county overall. This suggests that housing market growth may be due to more than regional economic trends.

While the neighborhood still faces very low home-ownership rates among black households, poverty has been dramatically reduced among St. Clair Place’s black population. Overall poverty fell in the neighborhood from 56.6 percent in 2010 to 26.8 percent in 2016. That decline was driven by a drop in poverty among black residents. In 2010, 93 percent of black residents were in poverty. By 2016, that rate fell to 26 percent.

To address community development in a way that bridges social groups, Hay understands it is important to consider renters in programs and include them in decision-making. To accomplish this, NEAR has established a Renting Neighbors Task Force. This is also why some of the first redevelopment in the neighborhood was the production of 32 affordable rental units. Rental homes like this are an alternative to the often low-quality rental stock otherwise available. For example, a subdivided duplex that Hay refers to as a “flophouse” was rented at $75 per week for a room. The property has since been acquired by NEAR for redevelopment.

Connecting homeowners and renters also means bridging racial, social, and cultural divides. There can sometimes be social conflicts when low-income communities are transformed into mixed-income neighborhoods. Some of these issues have been studied in relation to HUD’s HOPE VI redevelopment projects, which redeveloped low-income housing projects into medium-density, mixed-income housing.

Aware of this important dimension of community development, NEAR develops “social infrastructure” in St. Clair Place by organizing porch parties and helping with festivals like the annual Feast of Lanterns, according to Hay. He says it is important for new neighbors to get to know the current residents of the neighborhood. As he tells new buyers at closing, “You can’t just live to yourself in this neighborhood. You have to be open and embrace diversity.” 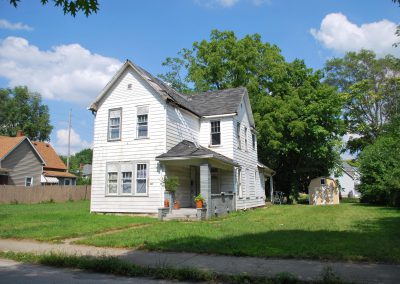 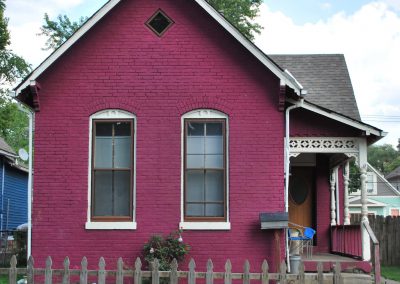 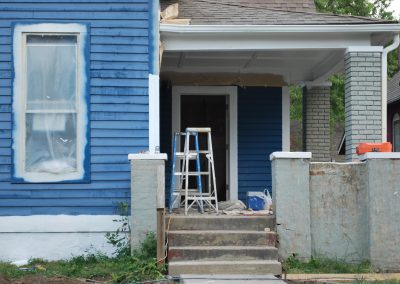 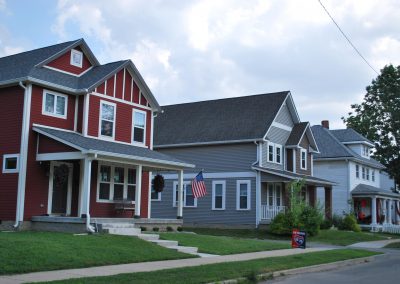 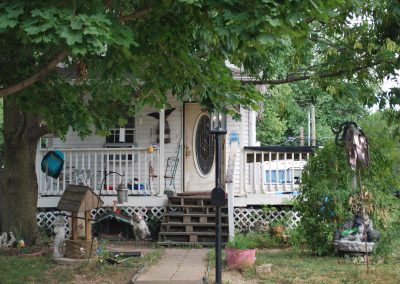 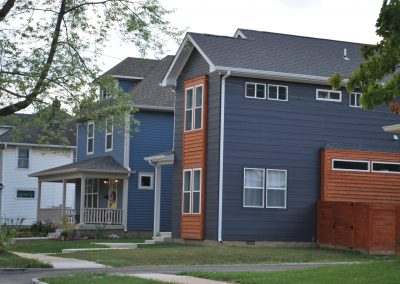 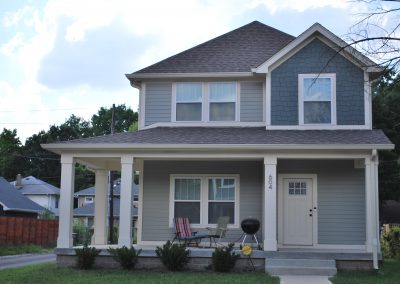 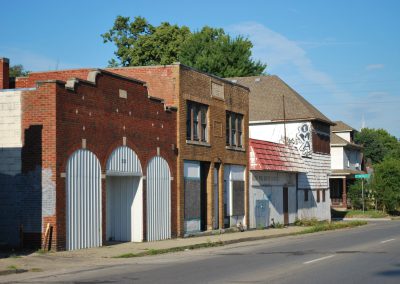 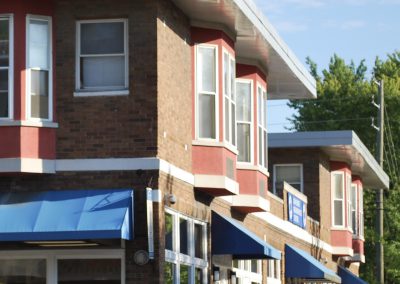 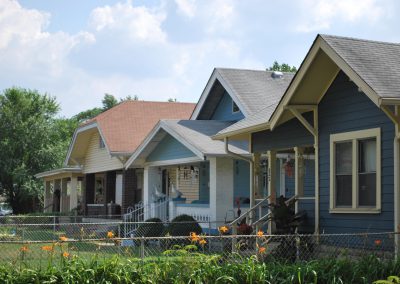 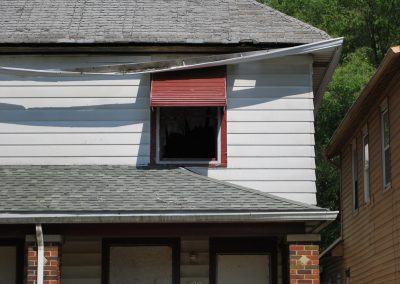 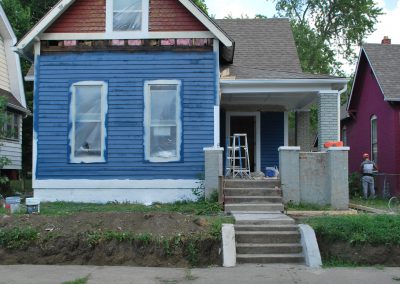