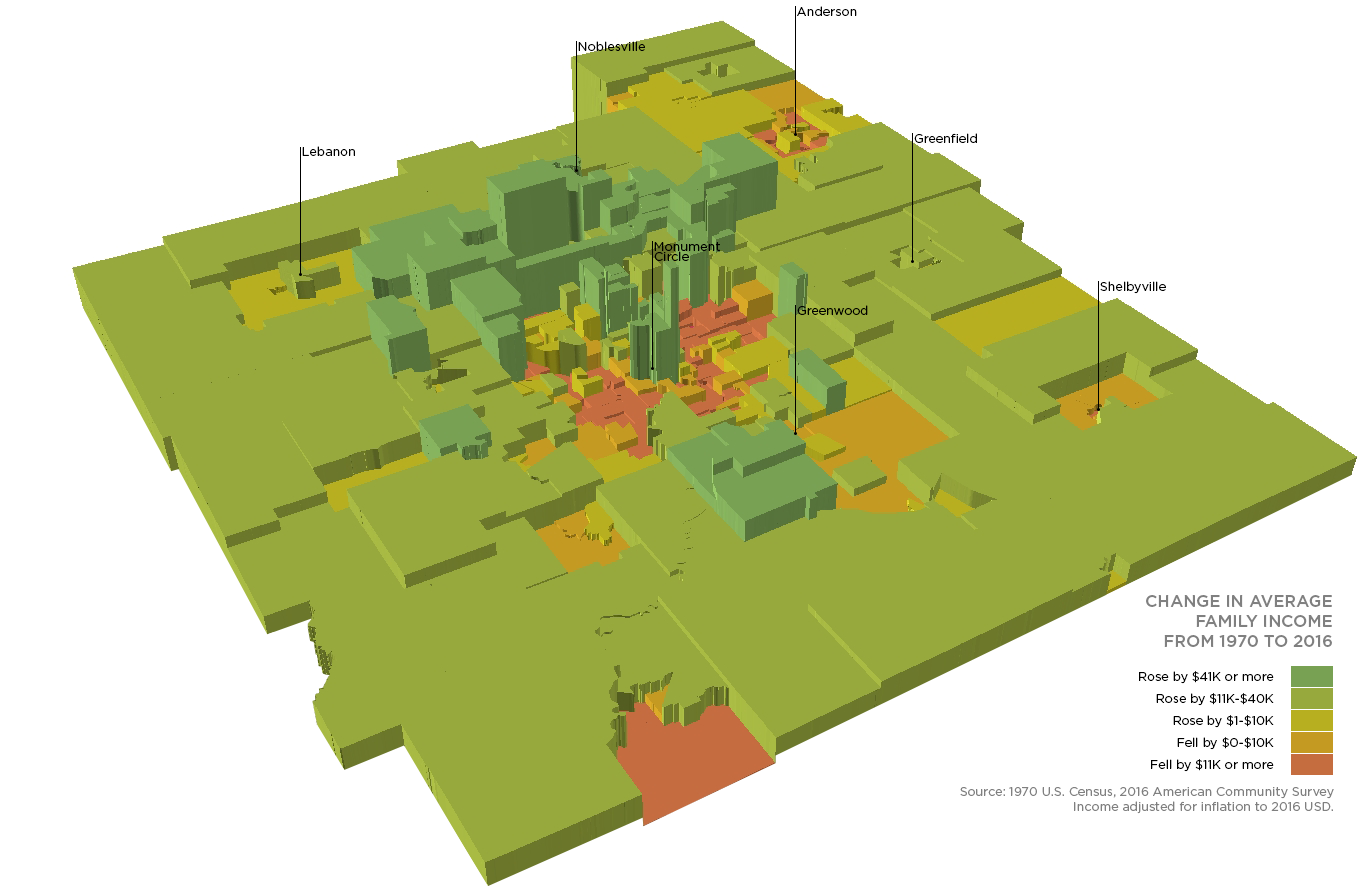 Since 1970, average family income has risen in half of the neighborhoods (census tracts) in the Indy metro. But 24 percent of census tracts have seen declines of more than $20,000. Most of these are located in Indianapolis’ urban core, particularly on the east, west, and south sides of the city.

As part of our research on neighborhood change, we analyzed change in five factors: race, income, education, population, and young adult population. In previous articles, we have taken a deep dive into race and population. Now we are examining changes in average family income.

Inequality Between Neighborhoods on the Rise

The animation below illustrates that, while suburban and rural tracts experienced income gains in the 1970s, incomes declined in the core of Indianapolis. In the 1980s, downtown neighborhoods become wealthier, but for many other urban neighborhoods, incomes fall again in the 2000s.

When we pair this information with trends in population migration, however, we can assume that people with higher incomes moved away from core neighborhoods and into suburban neighborhoods. We make that assumption because, from 1970 to 2010, there were extreme population losses in Center Township and population growth in other townships and counties.

Since 1970, Number of Rich and Poor Neighborhoods on the Rise

This map shows how incomes grew and shrank over time in the nine counties of the Indy metro. Each shape represents a census tract. As it grows taller, its income increases. In 1970, the landscape was more “even,” meaning there was not a big difference between rich and poor neighborhoods. Since then, income has dropped in many urban neighborhoods and risen dramatically in suburban areas. In 1970, there 38 neighborhoods at the extreme ends of the spectrum (where the average family earned more than $100k or $40k or less). In 2016, there were 124 neighborhoods at the extreme ends of the spectrum.

Real income has grown since 1970 in most rural and suburban tracts, particularly the suburban ring closest to Marion County. Outlying rural areas have seen modest income growth. The most dramatic growth is on the north side of the region. The west side of Carmel, near the Village of West Clay, experienced the highest growth in income. In 1970, it was already a high income neighborhood where the average family earned $97,000. By 2016, average family income had increased by $165,000.

Downtown Indianapolis has also seen income growth. The average family here earned $42,300, but income began to increase in the 1980s. This growth spread to areas like Mass Ave, the Old North Side, and recently Fletcher Place. These areas all have average family incomes well above $100,000. Fletcher Place saw one the biggest income increases, second only to the Village of West Clay. Average family income increased by $161,000 from 1970 to 2016, when it reached $218,335.

Meanwhile, many tracts in Indianapolis have seen income declines. As our report, Neighborhood Change 1970-2016, found, half of Indianapolis’ population lives in neighborhoods that have experienced income declines of 16 percent or more since 1970. There are 191 census tracts where income has declined since 1970. Of those, 79.1 percent are in Marion County and 11.5 percent are in Madison County.

As our economy recovers and strengthens after the Great Recession, it is necessary to continue to monitor these urban neighborhoods. As income rises in outlying areas, will it also rise in urban neighborhoods? Since 1970, this has not been the case. Some neighborhoods have received significant public and private investment and now have much wealthier populations than they did in the 1970s. It remains to be seen if these population increases will increase economic opportunity for the rest of the city.