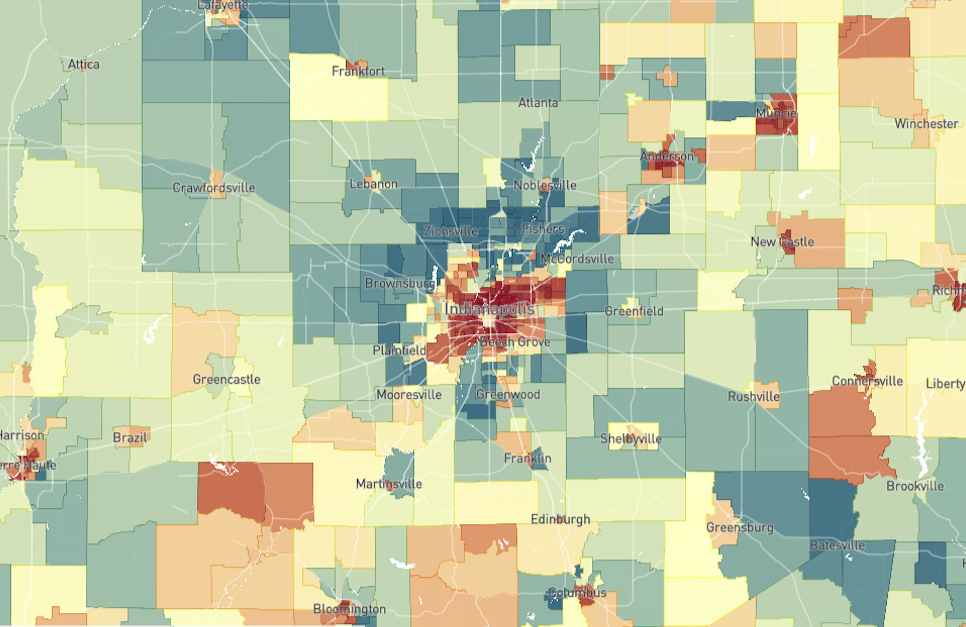 Using individual records from census data and IRS data, the Opportunity Atlas maps outcomes of adults by the neighborhood in which they grew up and the race, gender, and income of their parents. This research was led by Harvard’s Raj Chetty and the U.S. Census Bureau. (See the full methodology here.) The outcomes studied include household income, incarceration rate, and resident retention (the percent of children who stay in the metro in which they grew up), among many more.

We will look at local patterns in Indianapolis to learn how our region compares to the country and how our neighborhoods compare to each other. While there are 24 outcomes mapped in the atlas, we will focus on household income and resident retention.

The dataset is describing economic mobility as it existed in a neighborhood in the late 1970s and early 1980s, not necessarily how it exists now.

This is a longitudinal study, meaning data is collected about the same people over a long period of time (in this case collected by the IRS and the U.S. Census Bureau). The “children” in this study were born between 1978 and 1983. Their outcomes were measured in 2014 and 2015, when they were in their 30s. For this reason, the dataset is describing economic mobility as it existed in a neighborhood in the late 1970s and early 1980s, not necessarily how it exists now. In the 1970s and 1980s, the regional distribution of economic disparities was similar to today. Urban areas were largely worse-off after suburbanization drained population from the urban core. The north side of the region was the most affluent. But some specific neighborhoods are very different now than they were thirty years ago, and the outcomes of children born there could be very different as well.

We will compare the findings in the Opportunity Atlas in the context of our neighborhood change study to consider if particular neighborhoods may be likely to have different outcomes today. Of course, we cannot know the outcomes of children born in our neighborhoods today until they reach adulthood. 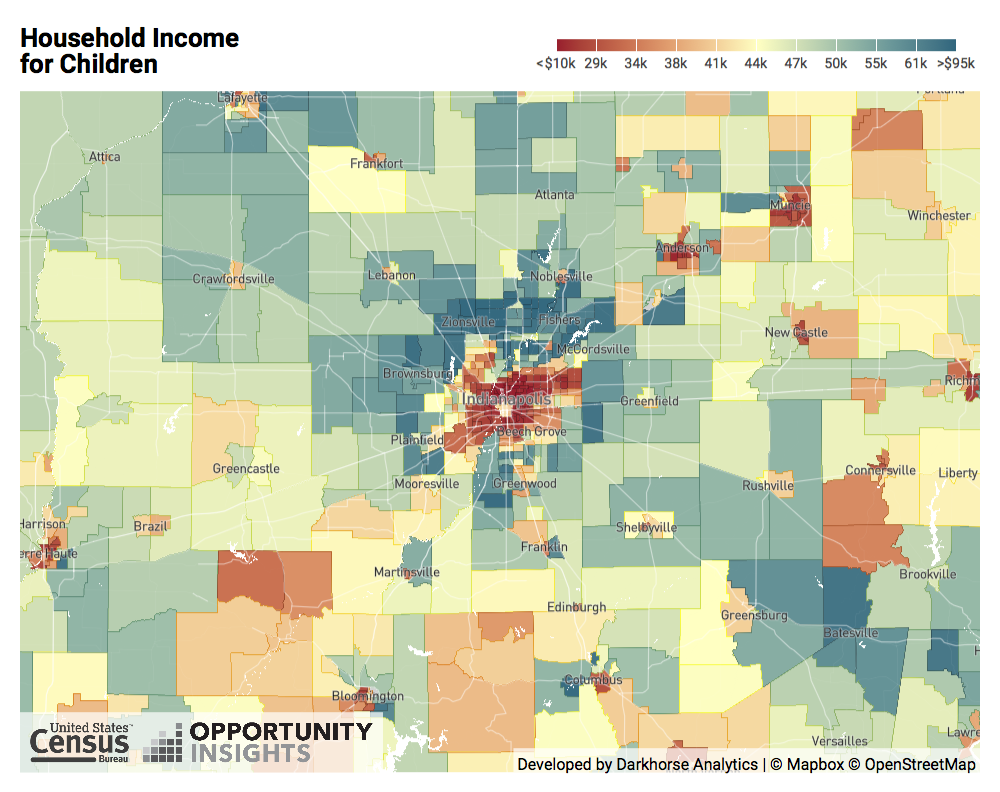 Children who were born in Indianapolis’ urban core tend to have lower household incomes when they are grown than children in other parts of the region. Nationally, the median child born in 1978-1983 grew up to earn about $44,000 in household income. The Indianapolis metro is similar, at $43,000.

This pattern plays out in every city and town center across the region. Children from core neighborhoods in Noblesville, Shelbyville, Franklin, and Lebanon on average have lower household incomes than children from surrounding areas. 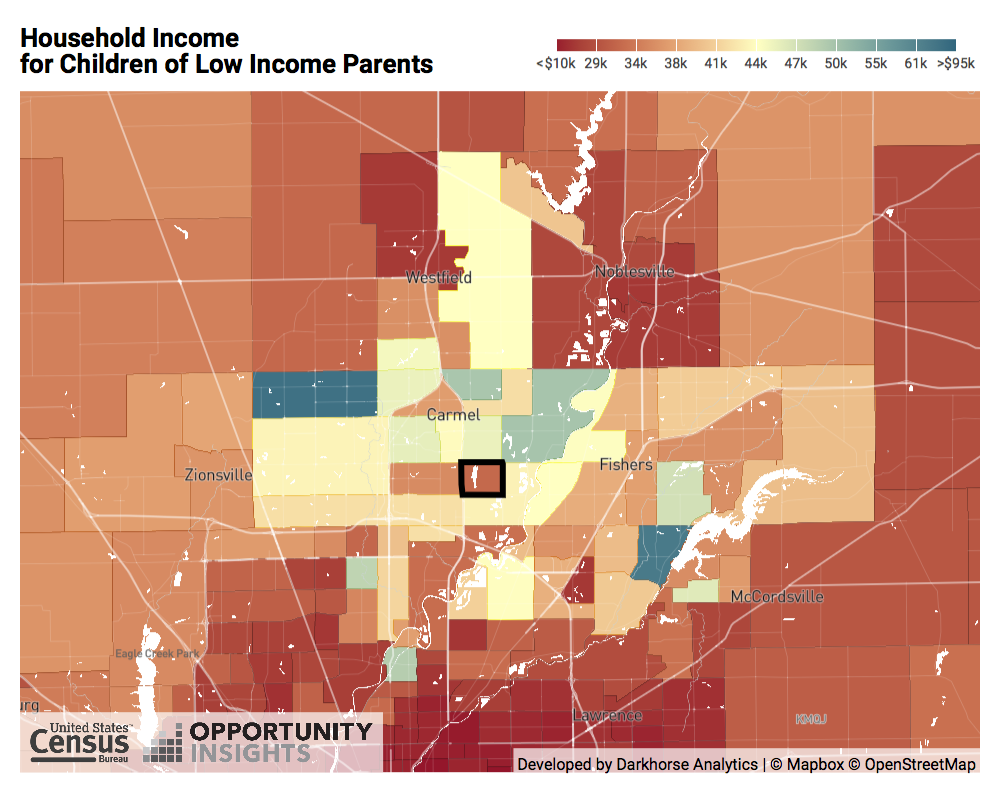 The picture may be very different in these neighborhoods now, especially Fall Creek Place. In 1980, Fall Creek Place had just shed 47 percent of its population in ten years. The neighborhood was low-income, 88 percent people of color, and had low rates of educational attainment. (Four percent had a bachelor’s degree.)

Now the average family earns $115,000 per year, six in ten residents are white, and half the neighborhood has a bachelor’s degree. Children born now in this neighborhood may experience different outcomes than earlier generations, because they are likely to be born into a very different socio-economic class. 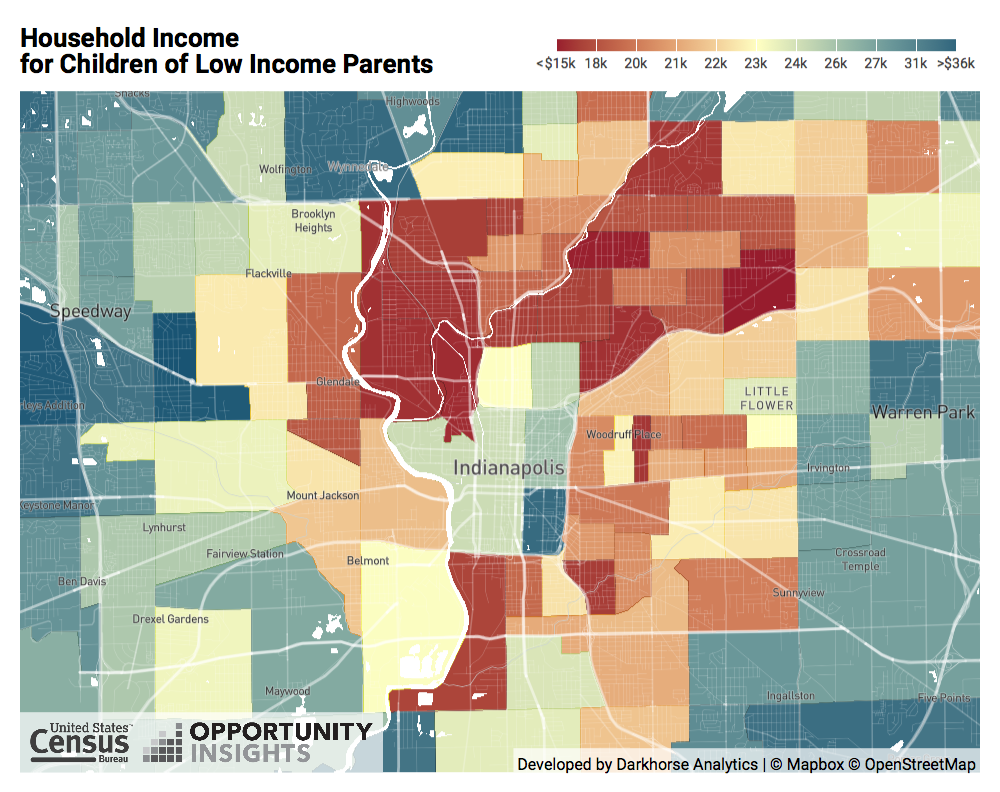 In Mass Ave, children grew up to $26,000, and in the Old Northside and Kennedy King children grew up to earn $23,000-$24,000. Other neighborhoods that approach the median of $23,000 include West Indianapolis, Hawthorne, Little Flower, Woodruff Place, Christian Park, and Twin-Aire.

While these household incomes are still lower than the median in Indianapolis, the outlying neighborhoods may provide some interesting insight into what enables economic mobility for low-income children.

Nationally, in the median city, 55 percent of residents stay in the same city in which they were born. The Indianapolis region does a better job of retaining residents (at least those born between 1978 and 1983). Three out of four residents born in the Indy metro in 1978-1983 still lived there in 2015.