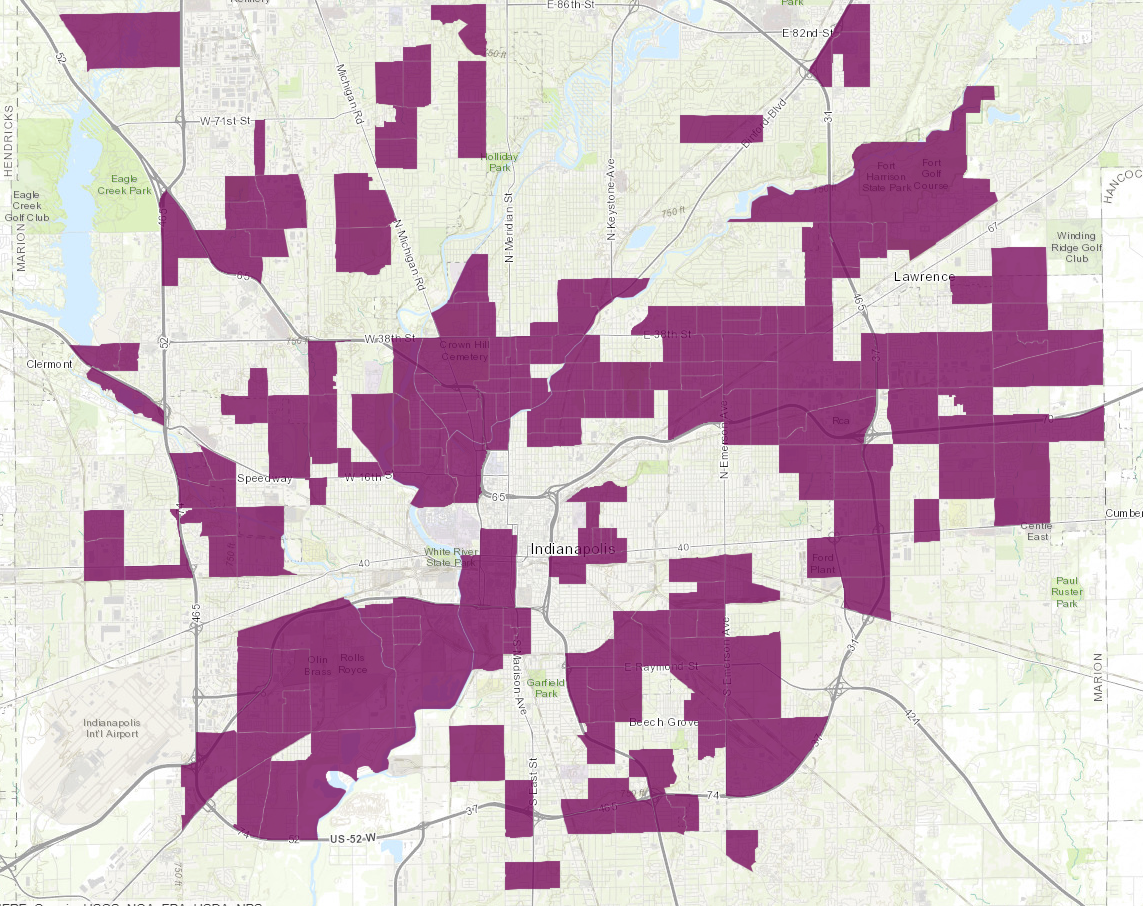 Using recent, local data to improve on food access measures, we find that an estimated 200,000 Indianapolis residents have low food access and live in low income areas. The largest food deserts are located on the city’s near northwest and northeast areas, southwest and southeast areas, and the Far Eastside.

The USDA Food Access Research Atlas is a great resource to quickly identify possible food deserts across the country. However, there are two ways it could be improved using local data. First, it measures distance from a grocery “as the crow flies” (using linear distance). Using local street data, we can calculate the driving distance from groceries. Second, the USDA uses two national listings of groceries and supermarkets that are both from 2015. We use local data from the Marion County Health Department for 2018, so we can get a more timely and accurate picture of food access (including the closures of Marsh and Double Eight).

Local analysis finds twice as many food deserts as USDA
Pct. of tracts and block groups with low food access

Food access is most critical in low income areas. For example, many middle class areas in Franklin Township have low food access, and this may be inconvenient for the residents. But the assumption is that residents with the resources to choose to live in those neighborhoods could have decided to live somewhere with more access to grocery stores.

Families in low income areas, on the other hand, are more likely to be in poverty and less likely to have one car per adult. Many households in these areas have no access to a vehicle, and many rely on transit.

The CDC defines food deserts as parts of the country vapid of fresh fruit, vegetables, and other healthful whole foods, usually found in impoverished areas. And it recognizes that is largely caused because of the absence of healthy food providers in those areas, such as grocery stores or farmers markets.

Just like the USDA, we identified low income areas as tract or block groups with a poverty rate is 20 percent or greater, or with a median income that is less than or equal to 80 percent of metropolitan area and has a median income.

A food desert is an area that meets the criteria for both low food access and low income.

Grocery stores, like other large retailers, tend to locate along major thoroughfares. This provides some low income areas on the south side, Near Eastside, and Near Westside with close access to a grocery.

However, many low income areas have low food access, making them food deserts. One of the largest food deserts are in the north and northwest of downtown in neighborhoods like Riverside and Crown Hill. Another large food desert is northeast of downtown in parts of Martindale-Brightwood, Forest Manor, and Arlington Woods.

Mars Hill and West Indianapolis, on the city’s southwest side, contain a large food desert, as well as parts of the Near Southeast neighborhood. Finally, another large food desert exists on the Far Eastside (north of Cumberland and south of Lawrence).

For this blog, five different datasets were used via the SAVI information System:

Population with low food access was calculated by multiplying the percentage of residential parcels far from grocery stores in a census tract/block group by the population of the tract/block group. This is only an estimate, because not all parcels contain the same number of people. (Some are single family homes, some are apartments, and some are vacant.) But is a reliable way to estimate population within a census tract or block group.