In October, we wrote about the most mixed-income neighborhoods in Indianapolis. We measured income diversity as the probability that, if you select two individuals from a neighborhood, they will be from different income groups. We then normalized this to a 0-100 scale, where zero is the lowest possible income diversity and 100 means residents are divided equally among all income categories. The typical tract in the region scored 61.

Income diversity is important because, generally, researchers agree that mixed-income neighborhoods can have advantages for low-income residents in the form of place-based improvements, like better schools, safer neighborhoods, well-maintained infrastructure. (Research generally does not show evidence for positive effects from low-income residents interacting with people from other socioeconomic classes. See the previous article for an overview of the literature.)

Some of the most income diverse neighborhoods were the Old Northside and Herron Morton, Rocky Ripple and Crows Nest, and the area near Pike High School.

The map below shows the predominant income group located in each tract. We based the cutoffs for these income groups on the region’s typical household income (called the area median income, or AMI), which was $66,700 in 2016. We considered incomes from $50K-$99.9K to be near the median. Households earning less than $50K are below, and households earning $100K are above.

If you layer the two maps we’ve seen so far, you see tracts with relatively low diversity of income groups, shaded based on which income groups are concentrated there. In the map below, tracts are filtered so only the bottom third in terms of income diversity are shown (scoring 58 or below).

Below, we will walk through an example of each of the areas: concentrated high income, middle income, and low income.

This part of Marion County’s Franklin Township has become less income diverse since 2011. In 2016, it was one of the least income diverse areas in the region, with a score of 38.75.

Most households are concentrated in the middle income categories, and this concentration is increasing. In 2016, 56 percent of households earned $50K-$99.9K, up from 50 percent in 2011. The share of the population below that income level fell by 9 percentage points, and above that fell by 3 percentage points.

More than a third of households here earn less than $10K per year, and 95 percent earn less than $50K per year. This concentration in low-income categories makes this one of the least income diverse areas in the region. It scores 39.16, and that has fallen by over 6 points since 2011.

The decrease in diversity is due mostly to redistribution within the low-income categories, rather than redistribution between low, middle, and high categories. In 2011, there were to “peaks” in the income distribution chart, with large concentrations at $0-$9.9K and $15K-$24.9K. By 2016, there was only peak, concentrated at $0-$9.9K.

This Carmel tract scores only 36.64 in terms of income diversity, because four in ten households are in the $200K or more category. Three quarters of the tract earns $100K or more, while only 8 percent earns less than $50K. While the income diversity score has not changed much since 2011, the location of the income concentration has shifted from $100K-$149.9K to $200K and above.

In future weeks, we will look at tracts that have changed the most in terms of income diversity. The spatial pattern with this data is not clustered, meaning tracts with increasing or decreasing income diversity are not necessarily clustered together. Instead they are scattered throughout the region. The average tract got moderately more income diverse (an increased score of 1.7).

Income diversity can change for a few different reasons. It could be an increase in high, middle, or low income groups. It could be the addition of income groups that were not present before. It could represent the transition from one income concentration to another. We will explore all these possibilities and sort out which patterns exist in which parts of the region. 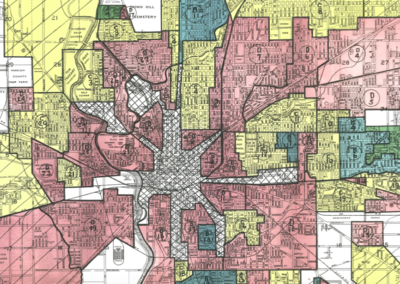 The Lasting Impacts of Segregation and Redlining

80 years after the federal government encouraged lenders to consider "neighborhood characteristics" like race in their lending decisions, redlining and segregation have a measurable impact on economic opportunity, health outcomes, the environment, and violence.

An increase in unemployment claims could drive the eviction rate from 7 percent in 2016 to 20 percent in 2020, and informal evictions may be twice that.

Police Used Force on 1.3 Percent of Black Residents Since 2015

Police used force over 1,600 times in 2019. Officers use force on black residents at a rate 2.6 times higher than white residents.