Police Used Force on 1.3 Percent of Black Residents Since 2015 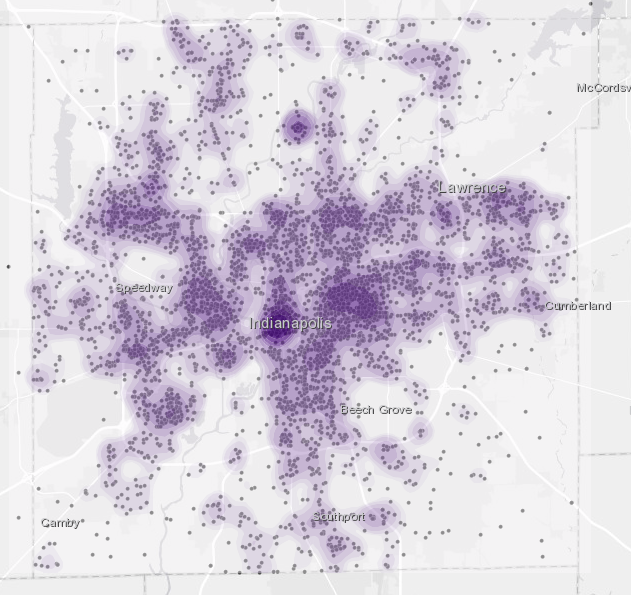 Police have used force on 13 out of every 1,000 black residents since 2015, compared to only 5 out of every 1,000 white residents. Police use force on black residents at over 2.5 times the rate of white residents. Police use force more often in neighborhoods with high crime rates. However, use of force is also associated with neighborhoods that have higher poverty rates, lower educational attainment, and more young black men, even when controlling for the crime rate.

Reported incidents where IMPD used force have nearly doubled in recent years. The department reported 1,687 incidents in 2019 and 873 in 2015. This trend may be the result of increased use of force by IMPD officers, or it may be signal that the reporting of use of force incidents has become more routine.

Reported use of force doubled since 2015

Number of IMPD incidents involving use of force

Race of people on whom police used force compared to race of Marion County population.

People on whom police used force per 1,000 residents


Police force is less diverse than population, but officers of all races use force at the same rate

Sworn officers are less diverse than the overall population. Only 56 percent of Marion County residents are white. Twenty-eight percent are black, and 10 percent are Latino.

Officers using force have same demographics as IMPD, but are much less diverse than overall population

Race of sworn officers, officers involved in use of force incident between 2015 and 2020, and Marion County population


Does the degree of force used vary by race?

This table shows the continuum of force model used in our analysis. IMPD’s data only reports when an officer uses a level of force of empty hand control or greater. Police presence and verbal commands are not reported.

The chart below shows the maximum level of for used in each incident. For example, handcuffing (empty hand control) is very common. It is used in over a quarter of incidents. However, most of these incidents also involve a higher level of force and are therefore categorized as something other than empty hand control.

Though police use force more frequently on black residents, they use similar levels of force across race and ethnicity

Percent of people by maximum level of force police used

Where do police use force most often?

This data only includes IMPD incidents, not incidents from excluded cities like Southport, Lawrence, and Beech Grove. The lack of incidents in these areas are because they are not reported in this data set.

To see patterns in individual neighborhood, we map these incidents by census tract. Click on a tract in the map below to see the rate at which police have used force since 2015.

The chart below shows the estimated effect that each of these variables has on use of force. This shows the effect of a neighborhood changing from average to above average in each measure while controlling for the other measures. (Tap or click the chart to enlarge it.)

Police use of force incidents by census tract

We have calculated, in each census tract, the number of black and white individuals on which police used force per 1,000 black or white residents. We then compared these two rates as a ratio. A ratio of 1.0 means police use force on black and white individuals at an equal rate compared to the population in the neighborhood. This calculation is only reliable when there are enough use of force incidents. Therefore, we have mapped tract with at least 15 use of force incidents since 2015.

The data set we used is publicly available from the City of Indy’s data portal. This data is current through June 30, 2020. (Note that they list the wrong update date on the data portal.)

Our analysis of the relationship between reported crime, demographics, and use of force incidents is based on a linear regression model.

Dependent variable: Log of use of force incidents per capita

Independent variables:
Log of reported crimes per 1,000 residents ***
Poverty rate *
Share of adults age 25+ without a high school diploma ***
Black men age 15-24 as a share of the population **

These independent variables explained 88 percent of the variance in the use of force incidents (adjusted R-squared = 0.878).