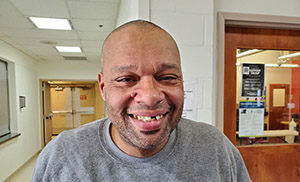 “Despite only making up 28% of the Indianapolis population, 54% of homeless people in Indianapolis are African American. Though there are few direct studies examining why homelessness disproportionately impacts African Americans, Marcie Luhigo, director of development and communications at Horizon House, said the disparity is likely the result of discriminatory housing practices and systemic issues.

“For example, are these folks given less leeway on leasing issues such as damages, late rent or deposits?” Luhigo wrote in an email. “Systemic issues such as being more likely to be convicted of the same crimes than white community members will create a criminal record that makes it more challenging to find housing.”

Further, roughly 28% of Black Hoosiers live in poverty — another catalyst for homelessness — compared to the 20% national average.  After a white flight from Meadows in the 1970s and ‘80s, the neighborhood suffered years of neglect from the city, and the crime rate rose rapidly, according to the digital archive Encyclopedia of Indianapolis.” Read more.–Breanna Cooper, Indianapolis Recorder